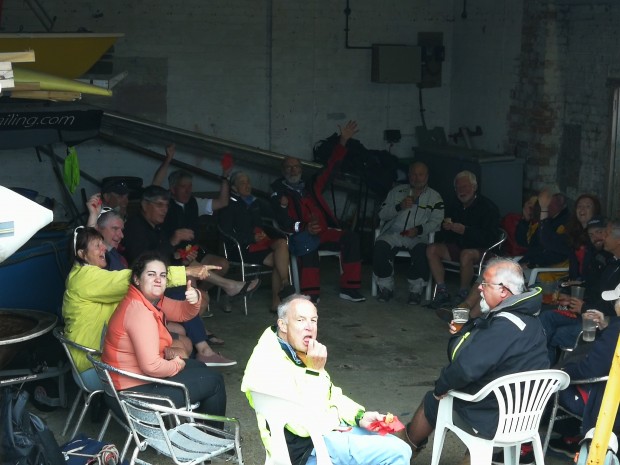 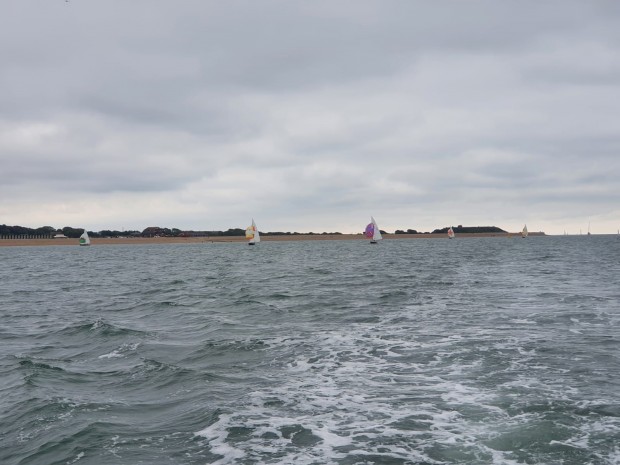 Third time lucky for the Solstice Regatta racing this year after the first two days were rained off. Our Saturday race saw 6 Victories venture out into the Eastern Solent to partake in a course, which once finished would earn them Cornish Pasties and Lemon Drizzle Cake. All washed down with lashings of (not ginger) beer. The course was a Committee Boat start at Royal Albert heading via:

With the race stating at 1300, just after low water the tide was running to the east. After crossing the start line all the boats headed out into the main Solent Channel to seek the tidal advantage. Gleeds was reached within 25 minutes with Z69 round first, followed by Z67, Z70, Z54, Z53 and Z73. Then the calls came, ‘what Browndown, that’s Cowes’; one unnamed boat even brought binoculars! Decisions, decisions as the fleet split, some towards the Haslar Wall and others back out into the main channel going the shorter route via the central Solent. At the Green Post, the fleet was close together running down the shoreline. No fishing lines were caught but we did interrupt a photoshoot, to the displeasure of the model, who’s outfit clashed with our bright spinnakers. And yet Z69 lead ahead of Z54, Z70, Z67, Z53 and Z73. As we carried on further east, more challenges awaited; a large fleet of Lasers needed to be navigated, most went round but two went through adding new obstaclesto the Laser course. Once navigated, the challenge was getting round Browndown against the tide. Z69 rounded first and whizzed off east with the help of the tidal gate. Z54 and Z70 had a tussle, a couple of jibes later Z54 rounded next with Z70 close behind. Z67, who decided to stay close in and have a nosy into the houses in Lee on Solent rounded 3rd. Z53 decided to try fishing as they went round by trawling their spinnaker whilst Z73 closed the gap.

The beat upto Gleeds beckoned, with the tide still going east the key was the balance of boat speed and height. Z54 went for height and Z70 went for speed; at the windward mark of Gleeds Z54 was ahead and even despite the earlier house viewings Z67 had crept up. With time ticking; the course was shortened at Royal Albert; this lead to close racing between Z53 and Z73, who had the dryer spinnaker? Z73 did; they pipped Z53 to the finish by just a couple of boat lengths. Ahead of them was Z67 in forth, Z70 in third and Z54 second, just. Z69 was first with room to spare.

Racing complete, but; most importantly the Cornish Pasties and the cake waiting back in Portsmouth, noses and bows pointed to the shore and headed home. Once ashore, a 2-course meal was enjoyed by all. We were all grateful to Liz, Angie and Zoe for the food and luckily we beat the rain which fell shortly afterwards.

Finally, before we finish do spare a thought for our Committee boat, (Sid, Annie and Mike S) their intention was for a fish supper but all they caught was the invisible fish. So, if it wasn’t for those pasties they would have been rather hungry this evening.

The Solstice Regatta is not over yet, we get to do it all again on Tuesday; up the harbour.