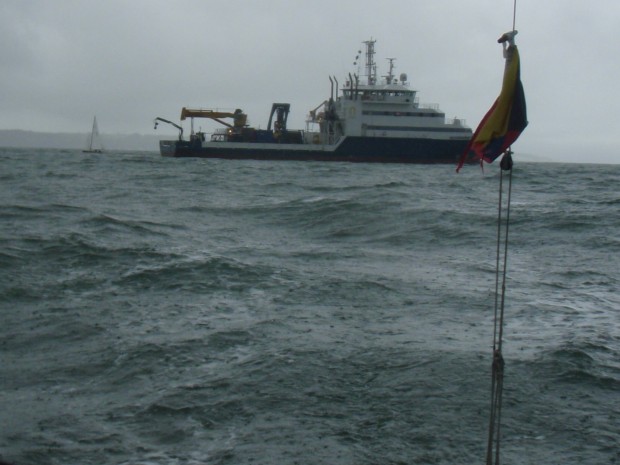 After the initial Saturday morning Social media activity – the class managed to rustle up 3 boats to race in the afternoon (Z54, Z69 and Z70). Interestingly Matt had persuaded Jim D to come out for a Saturday afternoon race helming Z70.

With the tide still flooding in the harbour entrance – engines were the order of the day to reach the race course in the becalmed conditions. As Z69 was the only boat fully crewed, the other boats forfeited the Gate boat duties.

With the wind steadily increasing at the start and the west going tide, Z54 crossed the gate boat line first with Z70 following a few lengths later. Working up to Gilkicker point Z69 led closely followed by Z70 and Z54. Z69 and Z70 decided to go South for the main tide while Z54 went west along the shore. With the breeze building Z69 slowly gained to windward against Z70, largely due to Z69 benefitting from having Joppers being the third crew and extra pair of hands. On the next cross Z54 had managed to gain leverage along the shore with breeze and lifting conditions. As Z54 crossed the fleet the breeze decided to build rapidly under the weather front up to the reported 32knots at Brambles post. The crew were “enjoying” the hailstone conditions as the fleet continued to race to NERM. Under the conditions the third crew and weight helped Z69 reach NERM first with Z54 second and Z70 third. On rounding the mark, a moving obstacle was encountered, (blasting a lot of signals – see Notice to Mariners), a survey ship with a tow. Z69 managed to gybe in front, while Z54 stayed south of the vessel and Jim decided to have a conversation with the skipper as the vessel blasted more sound signals….

This had allowed Z69 to reach Stokes Bay first for the tidal relief with the breeze dropping again to a zephyr. A run along the shore to Gilkicker before heading out to Gleeds. The crew could see the breeze and rain building again in the west. This allowed Z54 and Z70 to close the distance to Z69. The gybe at Gleeds, allowed Z69 to carry the kite on the tight reach to Suffolk Sails. With the breeze again building both Z54 and Z70 dropped their spinnakers at Gleeds for a white sail reach to Suffolk Sails.

As with the Saturday races, fleet communication allowed the OOD to shorten the course at Suffolk Sails, with the next heavy band of wind and rain approaching for the west. So the race finished Z69, Z54 and Z70. The sailors returned to PSC boomyard for the obligatory beer under the glorious sunshine.